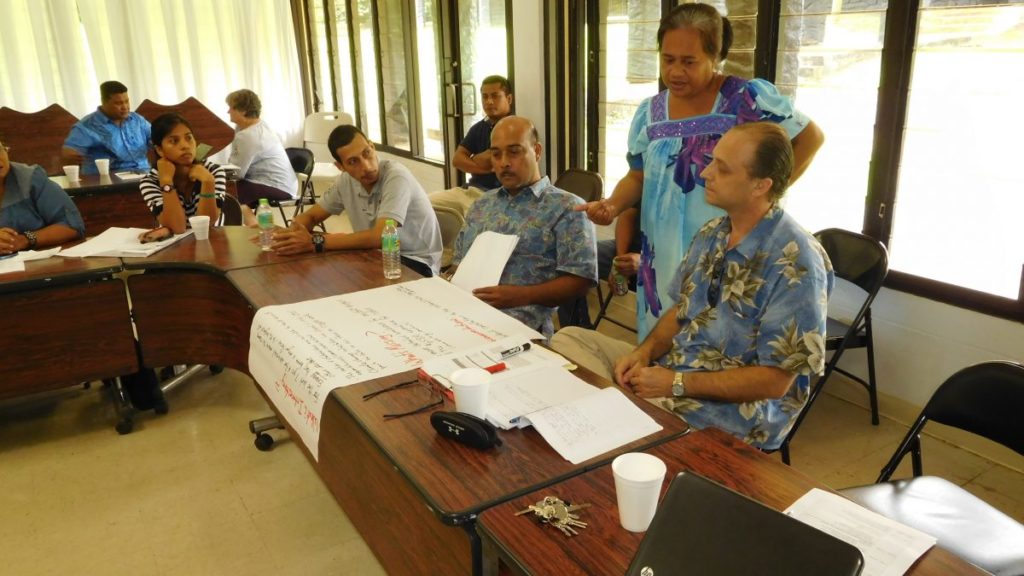 At the request of the Government of FSM, a multi-agency team including the Pacific Community (SPC), the USAID/SPC Institutional Strengthening in Pacific Island Countries to Adapt to Climate Change (ISACC) Project, the USAID Climate Ready Project and the Pacific Islands Forum Secretariat (PIFS) visited Pohnpei in February 2018 to work with the Government to assess their processes and systems using the Pacific Climate Change Finance Assessment Framework. The team returned this week to present and validate the preliminary findings with a broad range of stakeholders.

Ms. Sihna N. Lawrence, Secretary of the Department of Finance and Administration, noted “We need this analysis of where donor and domestic revenues are spent. As we try and implement new systems we need to know the areas we need to prioritise”. Mr Andrew Yatilman also thanked the team for their efforts in developing the findings for FSM, which clarify the current national climate change and disaster risk finance landscape and the key partners involved.

The preliminary findings show that FSM is currently accessing climate change and disaster risk finance. Most external support for climate change and disaster risk activities comes from bilateral sources, with a focus on climate change mitigation directed at the energy sector. FSM is the first Pacific Island Country to have developed its Green Climate Fund (GCF) Country Program and an NGO, the Micronesian Conservation Trust, is accredited as a Regional Implementing Entity to the GCF. The Government of FSM has demonstrated its seriousness to address climate change and disasters with the recent establishment of a new Department for Environment, Climate Change and Emergency Management. There are also a range of national and state policies and plans, which supports the national and state governments in their engagement with donors and other stakeholders.

However, like other Small Island States, human capacity is a major challenge for FSM, with implications for effective implementation of larger-scale projects. FSM also has an opportunity to build on policies and programs that focus on culture, youth, elderly, people with disabilities and gender mainstreaming to strengthen its social sector capacity and its accessibility to climate change and disaster risk finance.