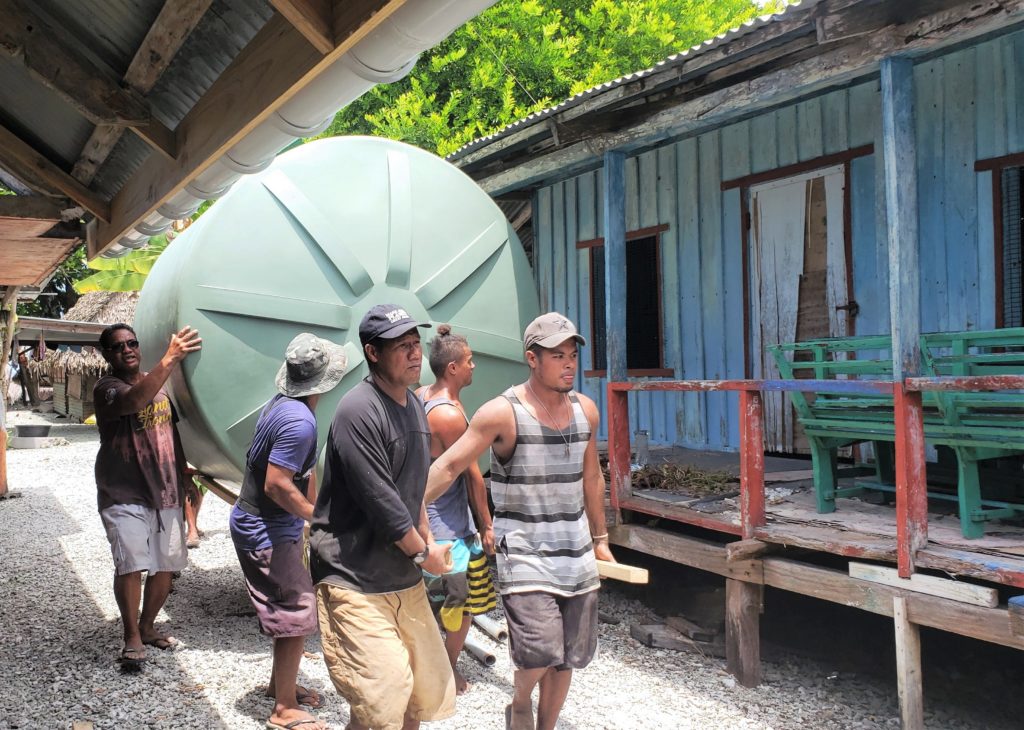 Installation of water systems in Kapingamarangi, FSM, one of the most remote and inaccessible places in the Pacific

A series of stories featuring ways to address drought and climate change in remote North Pacific Islands is being launched today.

Towards the end of 2015 and the beginning of 2016, the Federated States of Micronesia, the Republic of Marshall Islands and the Republic of Palau recorded a severe El Niño induced drought, resulting in a critical shortage of drinking water and food, which seriously impacted these island communities.

Following the declaration of states of emergency by the concerned countries beginning of 2016, the European Union responded with a ’Pro-Resilience – Special Measure’ to assist the affected populations. The ‘European Union – North Pacific – Readiness for El Niño’ (RENI) project is one component of this Special Measure.

The introductory video sheds light on the unique challenges faced in the outer islands in the North Pacific to secure food and water resources during and ahead of drought.

The following videos spotlight some amazing stories. In 2019, the project embarked on an extraordinary logistical challenge, spanning 14 months, to help the 500 people in Kapingamarangi in the Federated States of Micronesia, one of the most remote and inaccessible places in the Pacific, to secure safe drinking water ahead of drought. Focusing on the more vulnerable groups – the young and the elderly – the project provided for example, a direct water connection to the oldest resident on the island, an 80-year-old woman.

Residents in Ailuk, an outer atoll in the Republic of Marshall Islands, learned how to grow new crops as well as ways to prepare and cook the locally grown crops. Combining nutritious foods with participation in group exercises and regular health check-ups is helping families to change their behaviour and adopt healthy lifestyles.

Putting people in the centre of the action, the project put in place structural measures to help communities to prepare for future droughts. Eleven communities are benefitting from improved water storage and purification systems and two communities are growing crops from newly constructed plant nurseries.

Besides these very practical measures, the project also deployed long-term monitoring and planning activities in Yap Proper in the Federated States of Micronesia. These forward-looking activities do ensure that underground water reserves are effectively utilised to supply residents with sufficient water, also when facing future droughts.

“This is one of the projects that has done very well to ensure food and water security structural measures and associated benefits will continue well beyond the project closure. The high levels of community ownership, community capacity building and the provision of ample spare parts to assets are factors that will contribute to that sustainability,” said the Director of the Pacific Community’s Geoscience, Energy and Maritime Division, Dr Andrew Jones.

The video series was completed over a period of three years with footage collected from the design to the implementation stage ensuring a visual documentation of the project progress.

The video series can be accessed here, https://bit.ly/37df9Xu

Background:
The ‘European Union– North Pacific – Readiness for El Niño’ (RENI) project is about communities working to secure food and water resources ahead of drought. The three-year project (2017 – 2020) is funded with € 4.5 million from the European Union and implemented by the Pacific Community in collaboration with the governments and peoples of the Federated States of Micronesia, Marshall Islands and Palau.

More information about the project is available online: http://ccprojects.gsd.spc.int/eu-north-pacific-reni/