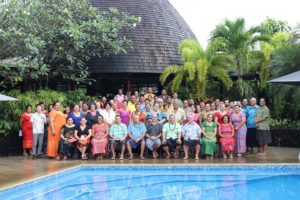 Five programmes alone have resulted in over USD 100 million for Samoa to strengthen resilience to climate change.  This was presented at the very first Samoa National Climate Finance Forum held today in Apia.

Advanced in its’ coordination of Climate and Disaster Risk financing Samoa established a Climate Resilience Steering Committee in 2011, chaired by the Ministry of Finance this Committee is responsible for coordinating these programmes and their funds.  Other project funding is managed by the different sectors responsible.

This well-coordinated approach at the national level is also sought at the regional level.

“We call upon a well-coordinated regional approach, particularly with the regional projects that have founded positive development approach to work in partnership with Samoa at this stage,” said Peseta Noumea Simi, the Chief Executive Officer of the Ministry of Foreign Affairs and trade of Samoa.

“The priorities of Samoa are similar to many of its Pacific neighbours, a need to enhance the resilience of our communities.”

Climate Financing has been described as a crowded space, with many partners, different funding modalities and different projects underway, both in Samoa and at the regional level.

The one day forum to hear of Samoa’s approach in addressing this, was initiated with the Government of Samoa by three regional climate finance projects partnering to plan and implement national priorities which will support access to climate change finance.

“The way in which these three projects have come together in the best interest of Samoa to avoid duplication should be commended,” said Mr Kosi Latu, Director General of the Secretariat of the Pacific Regional Environment Programme (SPREP), the implementing partner of the ISACC in Samoa.

“We hope you take the lessons learnt from this very first forum, and apply that to other activities in the region.”

The Samoa National Climate Finance Forum provided an overview of the climate finance projects in Samoa as well as engaging in discussions led by two panels – “Climate resilience support to Samoa” consisting of regional and bilateral partners, and “Climate change is locally experienced, how can it be effectively addressed by engaging local groups and institutions” a panel consisting of national NGO, Civil Society and Private Sector, Organisations.